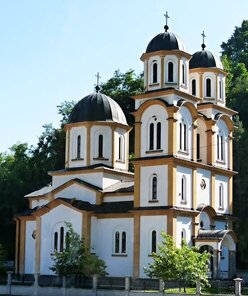 Orthodox Temple of the Holy Great Martyr Prince Lazar. The first temple in Jezero was built of wood during the Austrian rule, while in 1924 a new one was built of stone. It was destroyed by the Independent State of Croatia in 1942 and renovated in 1949. The temple was set on fire in 1995 by the Croatian Defense Council and the Croatian Army of the Republic of Croatia.